I've built the wheelset for the DL-1 Loop Frame project. The rims are ETRTO 635 (28 x 1 1/2) from DutchBikeBits.com in Holland, steel, painted black with gold stripes. The hub is a Sturmey Archer X-FDD Internal Brake Dyno, and the spokes are Sapim straight 13 gauge from Holmes Hobbies. 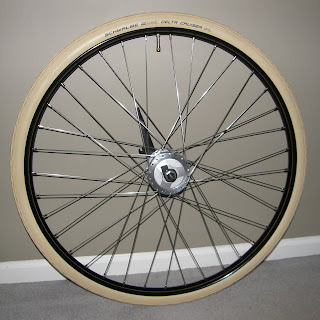 The next step is to put the wheels on the frame so that the locations of the cable braze ons can be determined.
Posted by Darrell Yarborough at 2:28 AM 1 comment:

I've had DL-1 fever for quite some time, but just never had made the plunge.  Probably because there are few DL-1s in the smaller size men's frame.  Since I own a few mixtes I thought, 'why not get a DL-1 loop frame'?

While I was down at Indianapolis Tweed Ride last weekend (November 2, 2013) I got the fever big time.  I saw several nice DL-1s and talked to their owners.

The one I acquired to restore is probably from the thirties.  It has the long head tube and lots of angle on the fork. 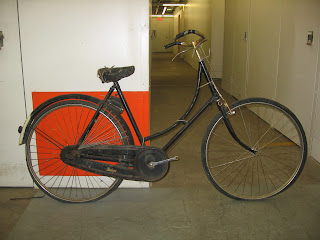 This is the bicycle I was offered.  I made a deal to purchase the frame, fork and chaincase.  The headset, crankset, bottom bracket and seat post were also included. 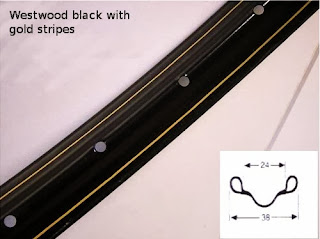 I bought a fender set off a more contemporary DL-1 that was being parted out.  They are very straight and will paint up nicely.  I'm going to try and keep a thirties feel when kitting out the bike. 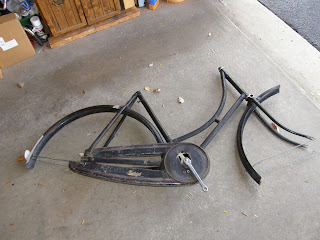 Here's everything I have now laid out in mock-up.  I have a stubborn cotter on the right side that needs to come out before I do the remaining disassembly.  Once that's done the crankset will probably go for rechrome.
Posted by Darrell Yarborough at 2:09 AM 1 comment: 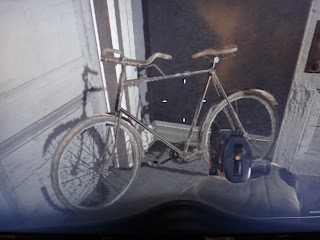 Here's a snapshot of a DL-1 style bicycle that I found in the Paris campaign of Modern Warfare 3 (a video game)!
Posted by Sean Dicken at 9:22 PM No comments:

Available in Germany and a limited edition at 125 bikes.

Rear coaster brake and front drum brake are upgrades over the rod brakes for sure. The Brooks saddle and grips are a nice touch. The orange Sturmey Archer crank is a curious decision, but it certainly does make the bike stand out. Things that I would have done differently in a limited edition roadster include: starting out with a larger frame, choosing a less conspicuous crank, more of an antique "heritage" typeography on the tubes, and utilizing a chainguard that covers the entire top of the chain. Despite these minor annoyances, I think it's a nice tribute to the brand.

Apparently, in 1980, Raleigh released a Special Edition Chrome DL-1. Not only is it chrome, but it appears to have come with a Brooks B33, nicer fender stays, front and rear powered lights, a full chain case, a Raleigh logo bell, and a front mud flap. Was that rear rack stock? It's a real looker! 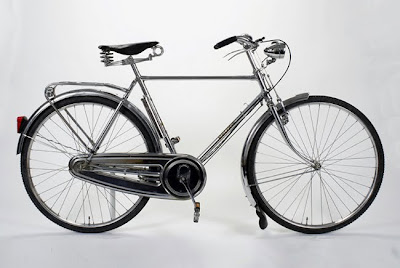 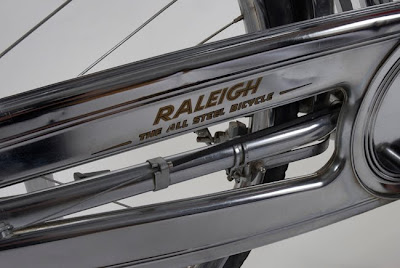 Images from The Public Blog

If anyone has any information or literature on this Special Edition bike, I'd love to learn more! If anyone has one of these bikes for sale, please contact me :D

Tom Ward, in Brooklyn, owns one (found on Flickr): It's unusual for me to come across a rod-brake bike in the wild, but when I do, it certainly sticks out. I spotted this DL-1 clone today, an India-made "Hero Jet," in front of San Francisco General Hospital: 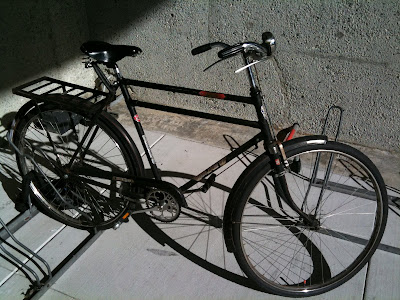 It appears to have the same geometry as my 24" Tourist. The double top tube was the only difference that I really noticed. The owner of this bike upgraded the saddle to a Brooks B67. 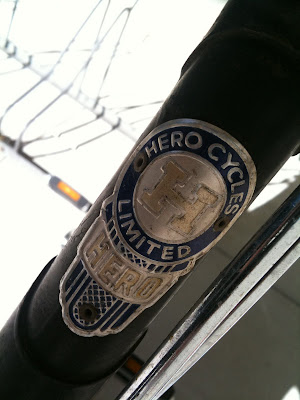 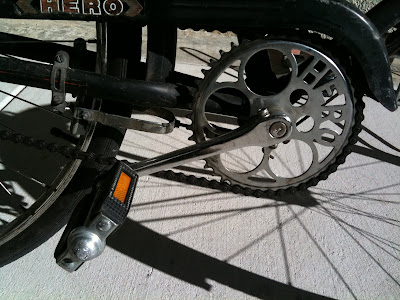 That chain ring design is reminiscent of brass knuckles, no? 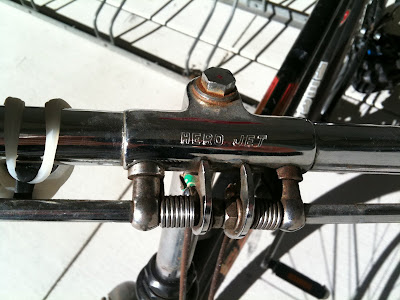 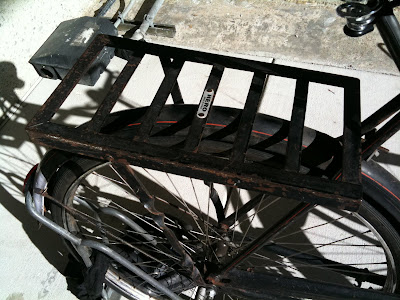 Follow the manly man for more info about Hero Cycles Ltd.'s "Roadsterz"
(warning: it's like traveling back to 1995):

I love these photos of John Lennon riding a rod brake Raleigh bike: 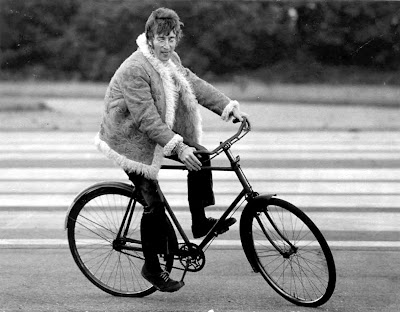 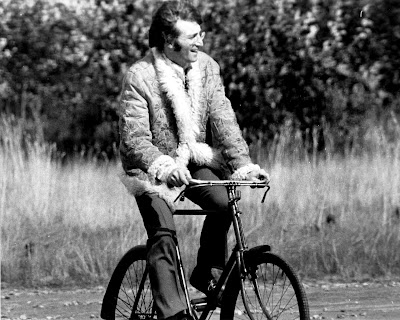 While I am not certain that this bike is a Raleigh DL-1, it certainly appears to be one... or two. These are two different bikes! One has blackout handlebars that are set higher than the chrome handlebars in the other photo. Same photoshoot though? rising70's Photostream on flickr is where I found them, and it is indicated there that these images were from the making of Magical Mystery Tour.
Posted by Sean Dicken at 4:15 AM 1 comment:

While this blog will mostly be concerned with restoring, maintaining, admiring, and customizing the classic Raleigh Tourist DL-1 Rod Brake bikes, I thought that I'd take this opportunity to mention that, in Denmark, you can still buy a brand new Raleigh bike based on the same classic frame geometry and styling today, in 2011!

Check out the 2011 Raleigh Tourist DeLuxe Lineup! They're available in both men's and women's frames in a variety of colors, several trim options, with your choice of brakes! Starting at a mere 5.099 kroner! 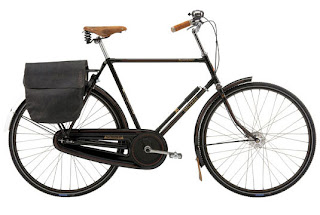 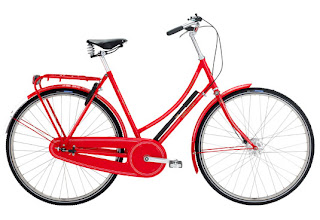 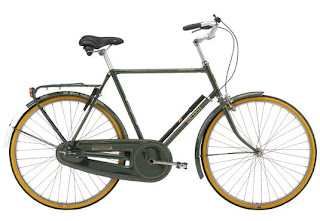 'Mr Colostomy,' of the Manchester Cycling blog, wrote up an article about his own Tourist DeLuxe. Check out his article here:
http://manchestercycling.blogspot.com/2010/06/raleigh-tourist-dl-1.html

Now to figure out where I can purchase those racks and chaincases...
Posted by Sean Dicken at 11:17 AM No comments:

In 1981, ride-up antique stores were commonplace and bicycle helmets were still just a dream. How times have changed!

In this photo, you can clearly see how the rear reflector is now mounted way up on the seat stay, replacing the saddlebag. The rear fender is now all black and reflectorless. This is how I believe my DL-1 was outfitted when it was new, way back in '76. 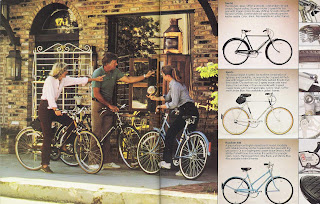 Found at http://www.jaysmarine.com/TH_raleigh_catdata.html
Posted by Sean Dicken at 9:14 PM 3 comments:

Check out these classy and timeless fashions from the 1973 catalog: 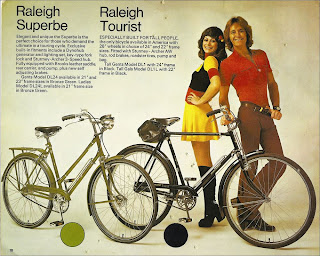 Found at http://www.jaysmarine.com/TH_raleigh_catdata.html
Posted by Sean Dicken at 12:28 PM No comments:

Bike Blogs that I enjoy